Children playing on our streets and local playgrounds were once a mainstay of cities and towns, but children are playing outside less. One campaigner in Monmouth took action and has created a new play space in her community.

Three years ago, Rachel Jupp saw a sign informing her of an upgrade to her local playground in Monmouth. She was unimpressed. She thought the design was uninspiring and the location was far from ideal as it was near to a dual carriageway and behind a flood defence and it was difficult to get to without a car. The current site is also unsafe because it’s somewhere where drinking and drug-taking is common.

Rachel decided to start a campaign to change the location of the playground and make it somewhere for all families to enjoy.

Rachel knew that something had to be done so she and some other parents formed a community group, Friends of Chippenham Mead. They decided to ask the council to move the playground to an open space in the centre of Monmouth, so that their children could play in a safe and healthy area – and so that parents could get there easily.

The group talked to parents, asked for the ideas of local children and took to Facebook to hear what other residents thought and to encourage debate. Friends of Chippenham Mead organised play-ins and a competition for children to design their ideal playground, while a change.org petition received over 500 signatures

Rachel even became a local councillor so that she could action change and set up a local Living Streets Group in Monmouth.

If you think something can be better, I would encourage anyone to speak up and push for the change that you want to see 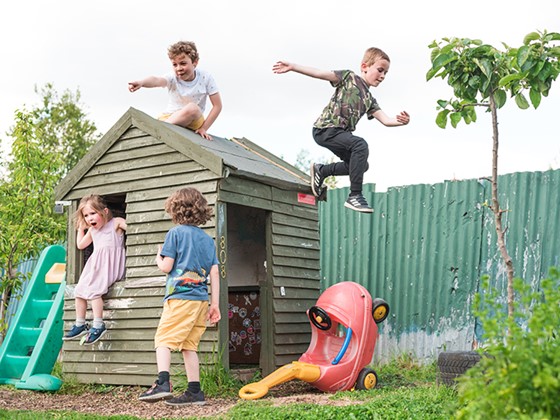 The next step is to plan a consultation with schools in the area and get someone to facilitate the children’s ideas. Friends of Chippenham Mead are waiting to hear from Welsh Government and the local council to see if their proposal for a new site will be approved, but they continue to campaign.

A new playground in a different location will mean less noise and better air quality for the children playing there. It will also be more visible from the town centre, meaning that more people can visit.

Playing outside has many benefits for children’s physical and mental wellbeing. Government recommends that children should exercise for an hour a day, but 84% of girls and 79% of boys don’t do this. And 37% of children haven’t played outside by themselves in the past six months (You Gov/Wildlife Trusts), often because they do not have safe spaces to do this. Sixty per cent of children aged 4-11 never play out on their local street – which is up from 50 per cent a decade ago.

As well as championing a new playground, Rachel is working to improve local walking and cycling infrastructure and create better routes to school, shops, work and play.

Talk to your community – your neighbours, other parents and their children – and get the local school involved.

Be patient, but persistent. Planning applications can take a long time, but keep talking to your local council.

Speak up. Ask your local council if improvements to local play areas can be made.

Get involved in the democratic process; you never know how much of a difference you could make.