We are calling on West Midlands Mayor, Andy Street, to deliver on his election commitments to ‘supercharge cycling and walking’ and make the West Midlands a region of walking cities. 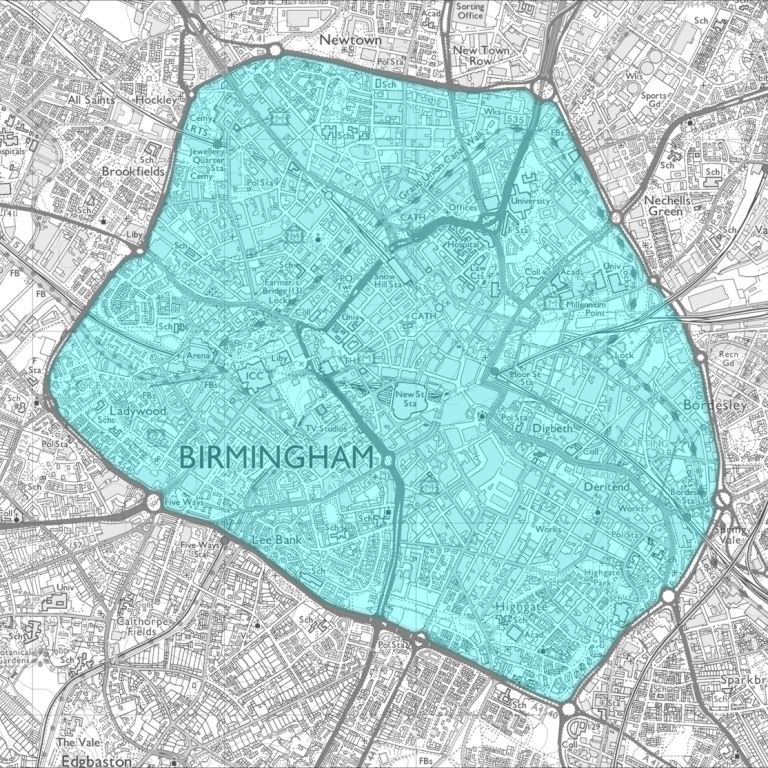 Living Streets is pleased to see Birmingham City Council taking steps towards addressing its poor air quality with the planned imposition by 2020 of a new Clean Air Zone.

Now, with the council's proposals open to consultation, we are encouraging people to have their say so the plan not only gets the backing it needs to become reality, but is also fit for purpose.

Poor air quality currently contributes to 900 deaths across Birmingham each year. The city needs dramatic change to make it a safe place to live, particularly for its most vulnerable residents – children and the elderly.

What is being proposed?

Birmingham plans to establish a Clean Air Zone (CAZ) by the year 2020.

The proposed CAZ, which you can see in the map above, will see the most polluting diesel vehicles charged to enter the area within the A4540 ring road, Birmingham Middleway.

The charge is expected to be £6-10 for private cars, rising to £50-100 for non-compliant buses, coaches and lorries, and aims to deter owners of more polluting vehicles from driving them into the city.

What does Living Streets think?

We see this as a significant step forward in a wider drive to reduce the emissions, poor health outcomes and inefficient use of space that result from an over-reliance on private vehicles.

As such we encourage everyone to take part in the council's consultation, which is running until 17 August.

The consultation is simple, and shouldn't take you more than 10 minutes to complete. Before you submit your own responses, here are some thoughts we have about the proposals as they stand - perhaps they will help you formulate your responses.

And this is not only for Birmingham...

The benefits and implications of the way Birmginham's CAZ will affect people from across the West Midlands Combined Authority's area - which also covers Coventry, Dudley, Sandwell, Solihull, Walsall and Wolverhampton - and arguably council areas adjacent to these.

Also, the significance of the UK's second-biggest city adopting a CAZ is nationwide. This is definitely a case to watch!

More on our Walking Cities campaign

We are calling on West Midlands Mayor Andy Street to make the Walk to School safer to help tackle a host of problems including child obesity, congestion and air pollution.

Our research has found that over a third of Birmingham parents (36%) think their city is unsafe for children walking to school.

Andy Street said: “We have one of the highest rates of obesity in the country: around 40% of children here leave primary school overweight. A generation ago, 70% of people walked to school, now fewer than half of children walk to school. People don’t cycle and walk because there aren’t safe enough routes, or because they don’t know about them.”

His ideas included the transformation of the West Midlands canal network into "superhighways for cycling and walking safely to school and work".

He added: “We need to make sure that people are aware of what their cycling and walking options are with improved signage and efforts to increase people’s awareness of the routes in their area.”

Our campaign aims in the West Midlands