Charity for everyday walking, Living Streets Cymru wants to see more action from the Welsh Government for rolling out the Active Travel Act.

In January, along with a number of other organisations, Living Streets gave evidence to a committee to raise concerns over a lack of investment and direction for the Welsh Active Travel Act. Although Wales is the first country to pass such legislation, Living Streets says it must do more to become leaders in this area.

Rachel Maycock, Living Streets Cymru Manager says: “I was pleased about the level of interest from Assembly Members at the recent Business and Enterprise Committee but I think today’s report merely highlights how much work needs to be done.

“We want to see Wales realise its active travel ambitions and give communities the benefits walking can bring. These include less congestion and pollution, a better sense of community cohesion and of course the important physical and mental health benefits for individuals who walk and take part in active travel as part of their everyday lives.

“We are dealing with a decline in the walk to school and more and more people driving instead of walking short distances. Low physical activity levels among children and adults costs NHS Wales £650 million a year.”

We want to see Wales realise its active travel ambitions and give communities the benefits walking can bring.

We are Living Streets, the UK charity for everyday walking.

We want to create a walking nation, free from congested roads and pollution, reducing the risk of preventable illness and social isolation and making walking the natural choice. We believe that a walking nation means progress for everyone.

Our ambition is to get people of all generations to enjoy the benefits that this simple act brings and to ensure all our streets are fit for walking.

For more than 85 years we’ve been a beacon for walking. In our early days our campaigning led to the UK’s first zebra crossings and speed limits. Now, our campaigns and local projects deliver real change to overcome barriers to walking and our ground breaking initiatives such as the world’s biggest Walk to School campaign encourage millions of people to walk.

Alternatively you can email commsteam@livingstreets.org.uk 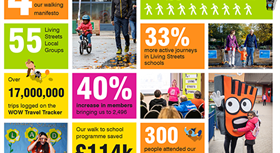 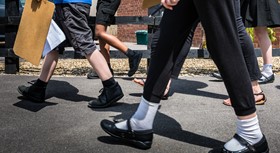 Walking to school during a pandemic 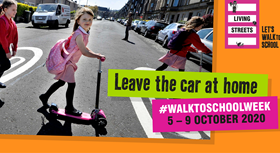 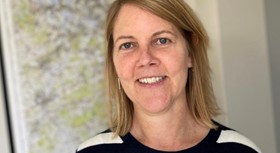 A walking journey through cancer recovery