Living Streets’ former Chair, Alastair Hanton, passed away on 26 May, 2021.

Alastair was a kind and generous man who initiated many campaigns with a sense of what was needed, what was possible and what could be achieved collaboratively. 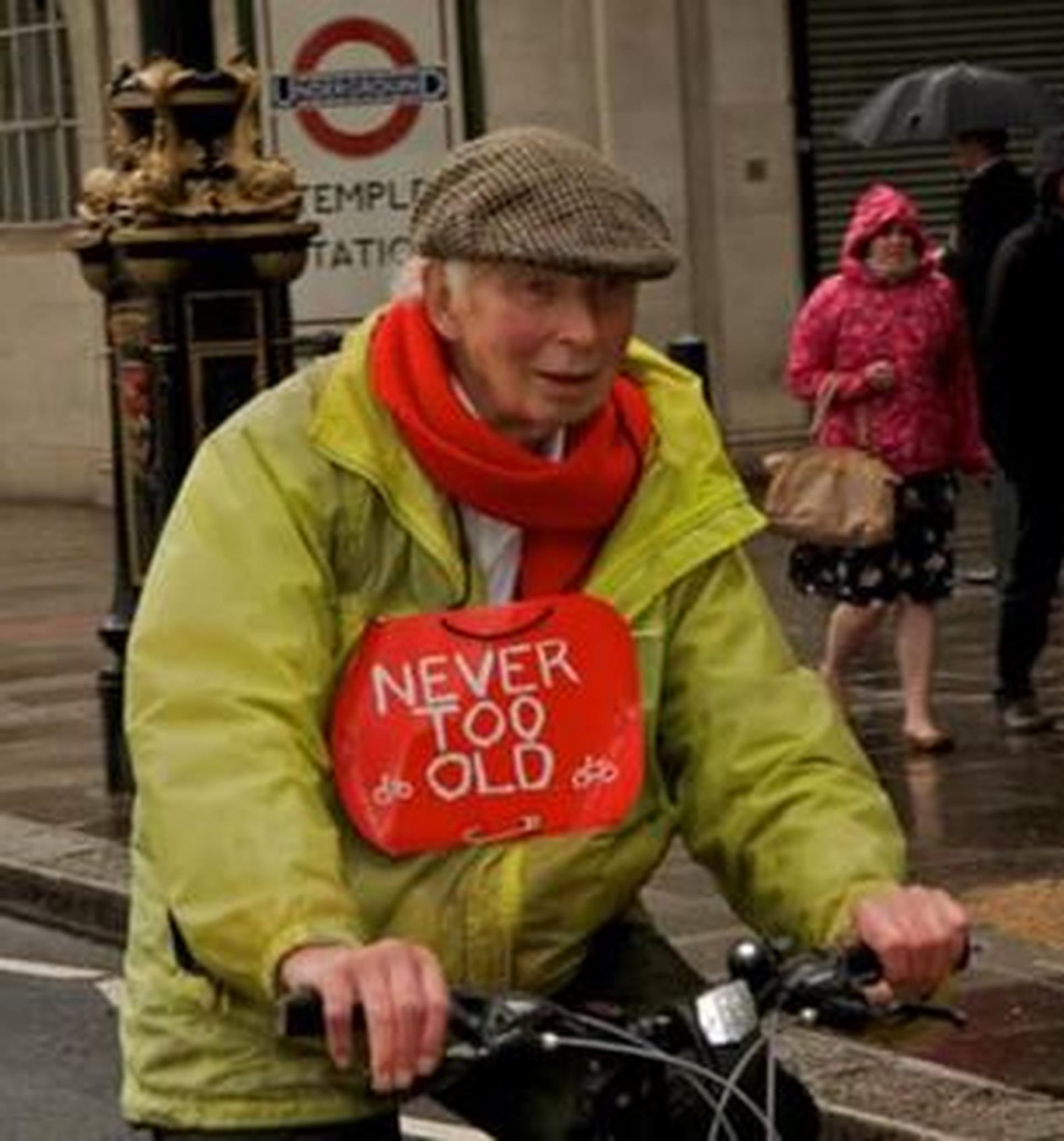 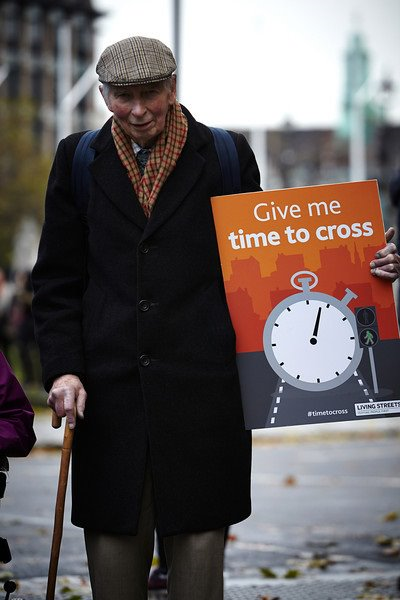 Our former Chair, long-standing member and lifelong campaigner was not only a wonderful person to know personally but he inspired a new generation of people to follow in his footsteps. We are humbled that he chose to advocate, champion and pioneer our work around creating accessible streets, reducing road danger and car dominance.

Alongside his work with Living Streets, he was a leading light for many other campaign organisations and movements internationally. His career and interests were extensive, from creating the Direct Debit system of payment to save people on low incomes the bank administration fees to establishing the National Girobank to give working people access to a bank account.

His commitment to social justice led him to become the Deputy Chair of Christian Aid and to set up a coalition of organisations that became the Fairtrade Foundation, where brands could use the Fairtrade brand in exchange for guaranteeing a set price to growers and producers.

In his retirement he had more time to commit to his passion for addressing the issues around road safety and prioritising pedestrians and cyclists alike. He established the Environmental Transport Association, galvanised a collaborative approach called Action on Lorry Danger, was pivotal in the creation of Road Peace, Cycling UK and was involved with Living Streets and London Cycling Campaign right up to the end. We always knew we were in the presence of an incredible person but hearing tributes over the weeks following his death we know the sheer benevolence of his kindness and tenacity.

We spoke to some people who knew him best about the impact he made on their lives.

Alastair loved campaigning because it combined his two favourite activities - making new friends and creating change. He set up and supported dozens of traffic calming projects locally in London and nationally to save lives, improve quality of life, and build community. One of these was the Environmental Transport Association, a green alternative to the AA and RAC. Another was his campaign for lorry safety after he discovered how many road deaths involved unsighted lorry drivers reversing or turning left.

He worked on the 20’s Plenty initiative to spread 20mph zones in residential areas nationwide, which is a direct response to the logarithmic link between a vehicle’s speed and its lethality. He developed Road Peace which memorialised a road death and then used the facts of the case to help traffic planners to make that location safer for others.

When he was almost 90, he and Simon Norton established the Foundation for Integrated Transport (FIT). This has become the leading grant-giving and campaigning charity for creating greener transport in the UK. Although Alastair spent the last few years building up FIT with Stephen Joseph and the Norton family, he continued to champion car-free transport in Dulwich, including working with the Dulwich Safer Routes to School project.

I first met Alastair in 2004. Changes were planned for the Walworth Road in South London and a small group of Southwark stakeholders had been assembled to support the project. I had no idea that there was an organisation dedicated to promoting the perspectives of people on foot and Alastair was brilliant at introducing me to Living Streets and, as was typical of him, downplaying his huge involvement with it. Around this time, he was setting up Southwark Living Streets Group and again it was a revelation to find the first meeting was attended by well over 50 people almost all of whom he already had strong personal links with.

As time went on, I found that not only was he an amazing campaigner for walking and cycling, fighting against the domination of the motor vehicle but that there were many other facets to his work striving for a fairer and more sustainable world. One of Alastair's greatest abilities was to play a long game, taking his cues from Robert the Bruce and the spider and not giving up easily. Never has that perseverance been more important as we emerge from the pandemic and the benefits that walking offers are needed more than ever.

'Persistence pays' was Alastair's campaigning mantra - and that's a great motto for any campaigner, in any field.

My memory of Alastair as a campaigner was the way he always got you thinking about the individual you wanted to influence and to treat them as a person. His campaign approach was very much built around relationships and persuading people, rather than shouting from the side lines.

He was very good at getting to the heart of the matter. In the run up to the 2012 mayoral elections I worked with him, Susie Morrow, Jeremy Leach and Caroline Russell - the London Action Group - to develop the #Cityof20 campaign. Alastair was always very good at the end of meetings getting us to focus on one or two of the most important things. Often he'd write them down on a very small piece of paper from his pocket or small diary.

I learned a huge amount from Alastair over the years we knew each other and have so much to thank him for. 'Persistence pays' was Alastair's campaigning mantra - and that's a great motto for any campaigner, in any field.

The other thing that struck me in watching and working with Alastair, was the great value of bringing interested people together to look at and experience a location 'in the flesh'. How did this junction 'feel'? How did people behave at it? Did pedestrians step forward with confidence, or were they made to feel cowed by the motor traffic?

Alastair was a fantastic convenor of people and somehow managed to harness their ideas and energy to produce practical ideas for action. We all came away feeling listened to and that we had something to contribute - and that our campaigning was worthwhile. So that's something else I learned from Alastair. We can only try to be more like Alastair!

Having worked at Living Streets for over a decade I have been fortunate to know Alastair and to witness his passion for making a difference to streets in London and beyond. Alastair played a critical role in our campaigning work in the capital, but he also supported our UK-wide campaign activity whole-heartedly and with gusto.

I remember he joined us outside the Houses of Parliament in 2013, with a placard and buckets of enthusiasm calling for more time to cross the road at signalised crossings. Alastair was the winner of our Charles Maher Walking Champion Award on two occasions. Living Streets would most certainly not be the campaigning force it is today without his ongoing support. 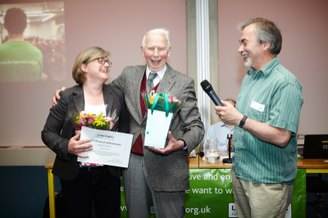 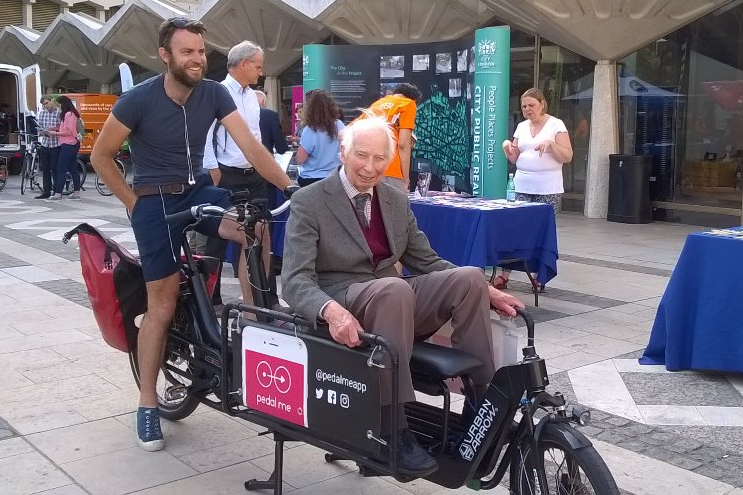 I’m so grateful I had the opportunity to work with and learn from Alastair Hanton. We campaigned together for many years with London Living Streets Group, attending vigils with Roadpeace to mark the deaths of people killed while crossing the road or riding a bike and always looking for opportunities to reduce road danger, improve crossings and junctions and push for measures like 20mph speed limits.

He taught me that public purpose should be at the heart of all policy and the importance of making inclusive streets to support children, older and disabled people.

My favourite memory of Alastair is the sight of him on his bicycle, pedalling around a quiet suburban corner in Dulwich. He was already waving in another direction when he saw me, braked, and stopped. His friendliness was legendry. This was how Alastair knew practically everyone in Dulwich.

I have a lot of very fond memories of Alastair particularly of our 90th Garden Party in 2019, he arrived at the door accompanied by a helpful stranger who escorted him to the door safely as he was feeling a little unsteady on his feet that day.

Alastair was absolutely incredible, passionate, dedicated and a true Living Streets Legend through and through. He was a trustee during a period and really helped us in our profile, mission and he was very very generous with his time and knowledge.

Alastair was a force of energy in Living Streets when I first joined in 2007. Reading the obituaries and tributes just shows the multifaceted nature of some of those involved as Living Streets members and Board, their amazing influence across social, economic and environmental issues.

Alastair was always encouraging, always wise, always helpful and I, for one, will miss him.

I'm so sad to hear that @livingstreets legend Alastair Hanton has died. @LDN_LS is right, he was an inspirational campaigner and did so much to reduce road danger. I was privileged to know him. He will be much missed. RIP https://t.co/G8I5yFiSpI

Oh this is such sad news. I learned so much from campaigning with Alastair Hanton with @livingstreets - there are not many people who have had so much influence pushing for healthy streets where people can walk and cycle in safety. A giant of walking who will be very much missed. https://t.co/GwrC2NK518

Alastair was a great support to both individuals and us as an organisation with his seemingly boundless energy particularly in #Southwark where he lived but also more widely. He will be missed by Sustrans and many more organisations and individuals. https://t.co/2ukL2STS0K

RIP Alastair Hanton. A true campaigning legend - and founder of @DirectDebitUK. It was a privilege to serve alongside him as Trustee of @London_Cycling - and to be mentored by him when I took the reigns of the Campaigns Committee. https://t.co/4SI7EhB3sx

.@LDN_LS I am sad to hear about Alistair. I knew since the 1980s with LATA, with Pedestrians Association, as chair of ETA Trust & again through Living Streets. Alistair's clear vision has been an inspiration to new generations of campaigners. He lived long enough to see results https://t.co/oFjUSuQ9OZ

So very sorry to hear of the passing of Alastair Hanton. He was a thoughtful, kind, gentle man. He cared deeply for and gave great and tireless service to his community. We will miss him. Our heartfelt condolences to his family. https://t.co/zT27W66OCm

Very sad to hear of the passing of Alastair Hanton. An inspirational, tireless campaigner, always working productively and collaboratively. I learnt a lot from him in my early career at Southwark. My thoughts are with his family and friends 🚶🚲 https://t.co/nZtpVCzF9m

A rare human who achieved great things, but was able to stay humble, uplifting and kind.

The creator of the direct debit, and of social change.

Sad to hear of his passing. We’ll miss him.

Ride on in the liveable city in the sky, Alastair. https://t.co/4ZFovKDad4

We are incredibly sorry to learn of the passing of our former Chair, Alastair Hanton.

A lifelong campaigner for pedestrian rights, we are indebted to him and his incredible work.

We will miss him. https://t.co/ml2nPiSKpO

You can read more about Alastair's incredible life in these obituaries