By making walking safer, more pleasant and the easiest option for short journeys, we can make change happen.

Our campaign is about conserving Edinburgh's UNESCO World Heritage site and rethinking our public spaces.

Find out what and how you can get involved to make Scotland's capital a world-leading walking city.

"The sensible requirement for a holistic approach to the wider problem of street clutter echoes the excellent lead given by the Council’s Street Design Guidance. It draws attention to the cumulative problems for pedestrians posed by 'signage, road markings, surface materials and street furniture including bollards, planters, cycle racks, lighting and bins'."

More on our Edinburgh Local Group 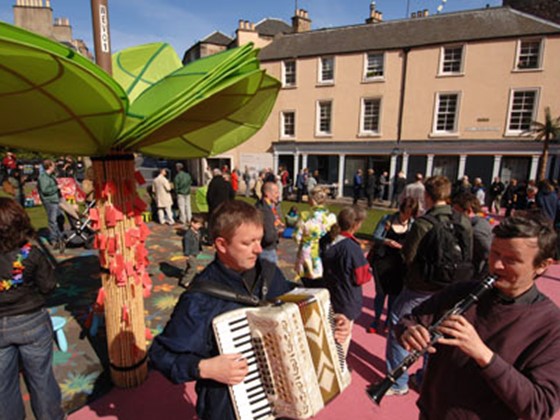 West Crosscauseway (otherwise known as The Causey) is a street that runs east-west and historically links two of the principal roads running south out of town. Members of the local community have been working at grassroots level to transform a neglected, car dominated cityscape into a vibrant, people-friendly place that celebrates the history and spirit of the Southside of Edinburgh.

We are asking you to support The Causey project and send messages encouragement as they face the next stage in planning. Find out more and how to take action to make your voice heard.

Read Our Blog From Space To Place

Edinburgh Living Streets Group is celebrating the result of years of campaign work which led to a transformation of the city streets. City of Edinburgh Councillors on the Transport & Environment Committee have backed the plan to introduce a city-wide ban on advertising boards (A-boards) – by far the most progressive walking measure ever introduced by the Council.

Two years ago, Living Streets Edinburgh Group undertook “Street Audits” in conjunction with Tollcross Community Council, and found the pavement clutter was so bad that they began pressing the City Council to undertake a major review of A-board policy. It was clear that A-boards had been turning Edinburgh’s pavements into obstacle courses, which was bad news for residents, workers, visitors and tourists alike.

Council officers were wise to advocate a city-wide ban, which is the fairest and simplest way of solving the problem. The new policy will only be fully effective if it’s properly enforced. A dedicated team of enforcement officers are to be appointed to help deliver a much clearer and safer environment for everyone across the city.

To advocate for change in Edinburgh making streets fitter for walking you can get in touch with our local group.

Edinburgh is visually stunning, but its poorly maintained streets and pavements and lack of pedestrian areas let the city down.

Rival cities including Dublin, Oslo, Barcelona are taking traffic out the city centre and creating new places for walking and public life.

Bold proposals on walking are needed if Edinburgh is to maintain its status as a great place to live and visit.

Living Streets is calling on the mayor and local councillors in a selection of major UK cities to pledge to make their cities healthier, cleaner and less congested by making our streets safe and inviting for everyone to walk.