Become a Living Streets Member and let's #ReclaimOurPavements together in 2022 and beyond!

Pavements are for people. And as the UK charity for everyday walking, we are their biggest champion.

If you share our passion, please support our Christmas Appeal.

We have never seen such momentum behind this issue.

On pavement parking, Scotland has introduced new laws against it, Wales has plans to regulate it, and in England we are calling for the outcome of a consultation on new rules to end it.

Meanwhile we've been calling on councils to cut all pavement clutter to prioritise space for walking and wheeling - the cheapest, greenest and healthiest form of transport there is.

But we need to finish the job. Next year will be a critical one for pavements. And we need your help to keep the momentum.

Support our Christmas appeal and become a Living Streets Member.

Already a Member? Make a donation

“It causes me anxiety and safety issues”

Rachel from Powys describes how “designed in” residential pavement parking is making her feel unsafe from the moment she leaves her home.

"I am a blind person and live in a cul-de-sac where every car is parked on the pavement. This causes me great difficulties in trying to walk into town. It causes anxiety and safety issues."

“Only response I get is an email that is as good as a shrug of the shoulders!”

Phil from Bedfordshire flagged a spot where nettles were overgrowing in flytipped waste on a suburban street - and no one was taking responsibility.

"The path is a main pedestrian route from a development of 1,700 homes to the town centre - and is overgrown on both sides with stinging nettles, which are growing in flytipped garden waste. This narrows the path, which is used by pedestrians, cyclists and e-scooters, and when a cycle or scooter goes by a pedestrian may be shocked and end up falling into the nettles.

"There is also a gate that makes it difficult for anyone using a shopping trolley or pram, it is possible to get round it but that involves going close to the nettles!

"Families, the elderly and disabled, and children could be hurt by these nettles; anyone falling into them would be very badly stung. The path is yet to be adopted but the council should be ensuring the safety of users of what is a public right of way.

"I have complained to the developers about it in the past, it was tidied up once, then ignored. I complained again about the time I logged it on Cut the Clutter - and, yes, it was tidied up - and once more left to regrow! I have also complained about the flytipping to both council and developer - this has continued, and been worse since our council stopped garden waste collections - but the only response I get from either is an email that is as good as a shrug of the shoulders!" 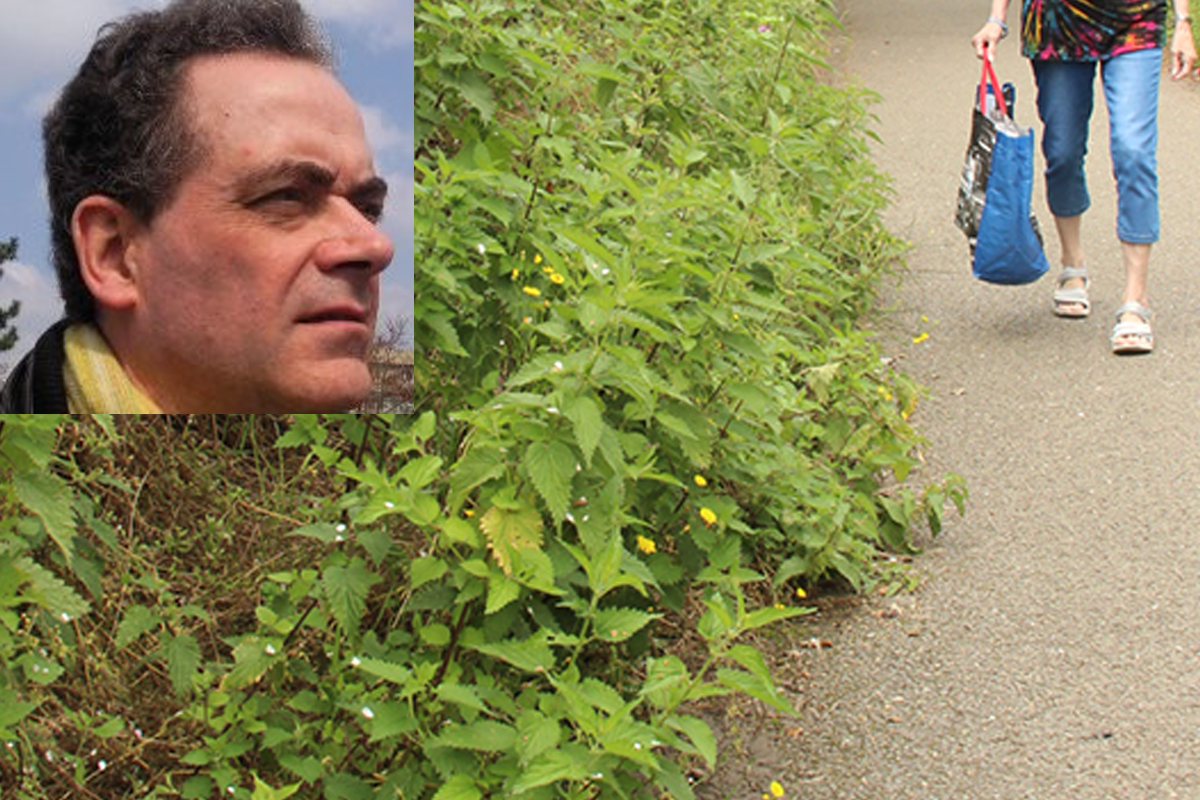 “It’s like a doing a slalom along the pavement.”

Helen from West Lothian told us about shop and pub clutter on her local High Street, the kind of thing which is taken for granted now.

“There is no clear line of site along the path. People need to go around one obstacle which then puts the next in their way. It is a case of doing a slalom along the pavement. Black bins are similar colour as the pavement so difficult to see for some. Or bases that stick out into the pavement area which could be a trip hazard.

"Once I started looking at pavement clutter as a result of this campaign I was spotting business clutter in every town I went to.

"Businesses generally set up in a location because it’s attractive, has good footfall and makes good commercial sense. However, it’s important to recognise the responsibility of maintaining that attractive location and it’s footfall for all, not just using it for individual commercial gain. It’s not sustainable. I do my bit by volunteering with Burgh Beautiful which has included sweeping this street and removing rubbish. We can all play our part.” 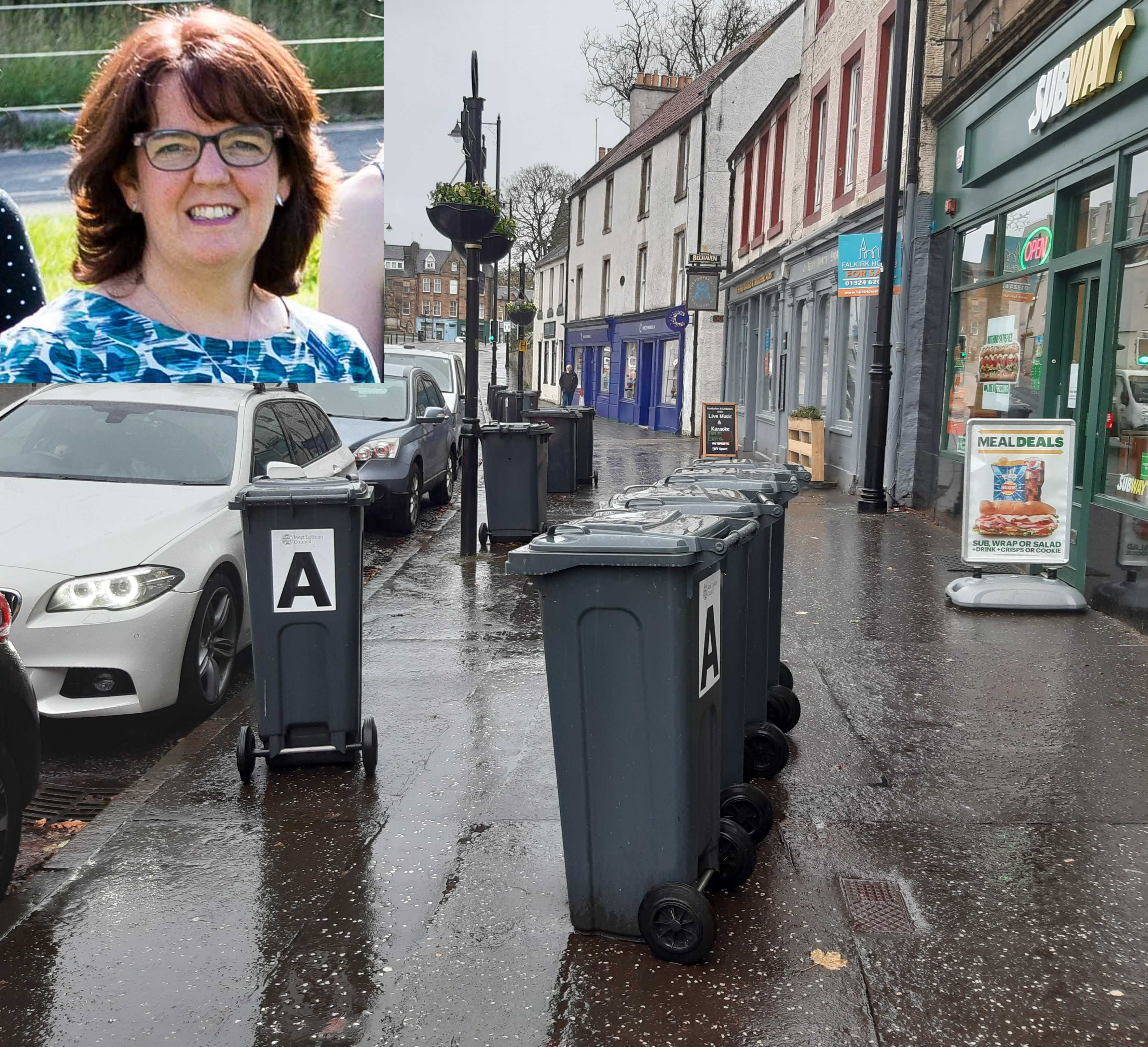 "Three litter bins placed widely apart (can they not be consolidated together?), lamp and sign posts and two enormous wooden planters. The planters are very large and high and get in the way visually and physically in one of the few sections of pavement in the are which is actually broad enough to stop and linger/rest on.

"As the community's prime town centre the clutter gives an impression of an uncoordinated and poorly designed urban realm, weighing on the aspirations of local people that hope to improve it."

“Pedestrians often have to wait in gaps between vehicles to allow others to pass.”

What happens when Pavement Parking collides with other clutter? Tim from Barnet might give us an idea.

"On both sides of Squires Lane, pavement parking is permitted by the council. This already creates a very narrow footway which makes it difficult for two people to pass in places.

"When household bins are placed on the pavement, it is impossible for those with wheelchairs to use the pavement and extremely difficult for people with pushchairs. Pedestrians often have to wait in gaps between vehicles to allow others to pass. Parking needs to be restricted to on-road parking only, on a single side of the road."

What our members receive

Support our appeal - join us today

More on our campaigns 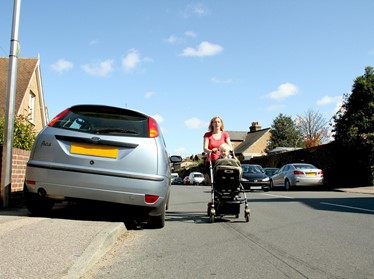 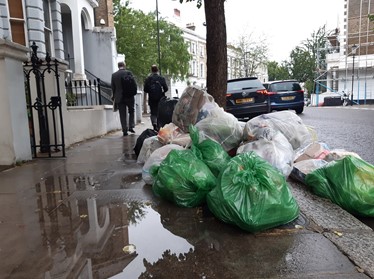