HACKNEY LIVING STREETS GROUP SUCCESSFULLY CAMPAIGNED AGAINST THE REMOVAL OF A PEDESTRIAN CROSSING WITH THE HELP OF LOCAL COMMUNITY GROUPS AND THE MEDIA. 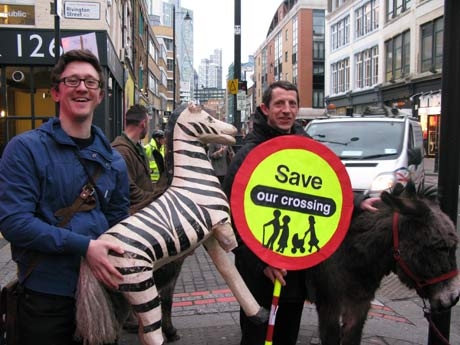 TfL instigated a crossing removal programme in 2012 which highlighted a crossing on Curtain Road for removal as part of their plans to smooth the traffic flow. The crossing was located en route to an eye hospital which was a key place to visit for people with visual impairments.

Although there were 11 registered objectors and none in favour, TfL sent us notice of a final decision to remove the crossing insisting there were no grounds for retaining it. This was to be done, they said, in the next few weeks.

“After missing the deadline for objecting to the removal of this crossing (which we were alerted to by a member of an allied group), we quickly emailed objections. We got other sympathetic individuals and organisations to object, including local councillors."

"Whilst the decision had been made, our Group agreed we could not let this happen without a protest. Despite the fact that there were only three of us at our bi-monthly meeting, we started organising an on-street demonstration. We decided to use a number of props, including lollipops saying ‘Save our crossing’ and cardboard zebra heads to make our event more visual.

"We sent a press release of our intention to the Hackney Gazette giving the date of the demonstration. They picked up on this and persuaded us to organise a smaller demo before the main event to fit in with their publishing schedule. They ran the first news article with a photograph of only the only two people who could make it at such short notice. They also got in touch with TfL to get a statement from them.

"The interest from the newspaper seemed to shake TfL who responded saying that a final decision on the crossing removal had not been taken. This was a huge about turn and our ‘proper demo’ on the scheduled day was more a celebration than a protest.

"Demonstrators from a wide range of groups came along including mobility- and visually-impaired people, cycling allies, politicians, the local city farm who brought two donkeys, with all of us using lollipops and zebra heads as placards. The very photogenic demonstration generated a lot of interest from the local newspaper, bloggers and a local student radio station.

"Thanks to all our hard work a few weeks later, we got an email confirmation from TfL that they were not going to remove the crossing."